Almighty-Eye Assassin In The Night Part 1

What If Christine Turned. A Daniel What If Discussion

Hey guys Ryan Melrose here and today it is time for my first What If based off an Independent Webcomic.

This is What If Christine turned
A Daniel What If
based off the webcomic by Sarah Nelson
please check out the series for yourself atwww.vermillionworks.com/daniel/enter

Lets get started
The What If starts right when Daniel is having his heart to heart with Christine revealing to het the terrible truth on how he became a Vampire. And who was responsible. Of course as we know by the main timeline Wayne was the one who murdered Daniel and accidentally set off the ritual that made Daniel into the monster he has become.
Christine is shocked by all this saddened and of course enraged. Something in Christine snaps like reality has amashed into pieces before her eyes. There is hate in her eyes hate for Wayne as well as for everyone else who treated Daniel badly. This is what created the Daniel before her. Now Daniel has finished talking and it's time for Daniel to slowly feed on Christine and do the inevitable. But  before he can sink his teeth into her Christine says it doesn't have to be this way. " When you went missing Daniel a part of my world went with you and when you returned I promised myself I was never letting you go again no matter what. Christine then grabs a Shovel and knocks Daniel out not for the rason you might be thinking. She runs off with the Shovel back to Daniel's grave site.

She runs like the wind she knows she won't have much time before Dniel wakes up and will begin to drain her. She begins digging at Daniels unmarked grave digging with a almost sadistic smile on her face. Digging like a Woman possessed. She hits something solid it is the same mysterious coffin Daniel was burried on top of. Christine  quickly removes one of her earings and and begins stabbing herself trying to perfectly replicate the circumstances that changed Daniel into a Vampire. Just like when Wayne stabbed Daniel. weakened and losing consciousness she lays down on the coffin.

At that moment Daniel catches up seeing his beloved Christine lyig motionless on the coffin. hristine was just able to get her eyes open she says with her dying breath.

'Bury me my love before it's too late..

Daniel is disturbed by this but ultimately understands what she's trying to do for him and obeys her wish. When he finishes he falls to his knees as the rain falls soaking him. as he cries saring at the hole he filled in.

"What have i done
not my Christine

Then the rain turned into thunder something was happening here as lightning shot across the sky. And with a loud burst Christine bursts out of the hole like Demon escaped from Hell.
She is laughing like an evil maniac is this really the same girl that went in. needless to say Daniel's happy to see his now Vampire girlfriend Christine. 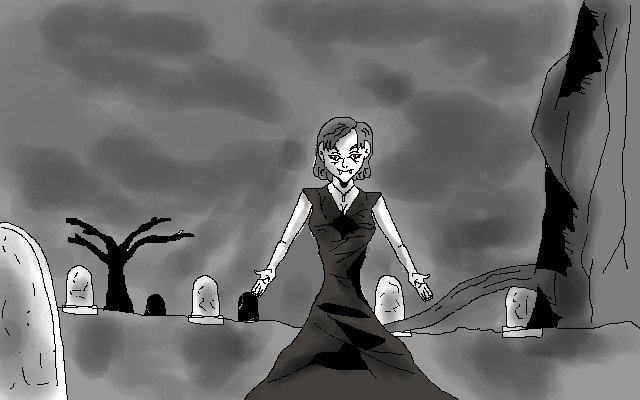 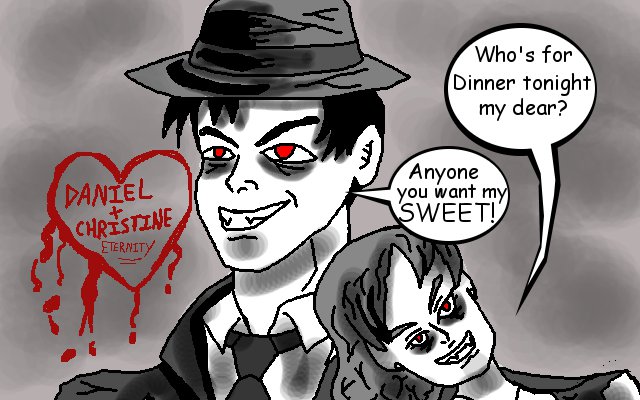 When Christine finally decides to come down Daniel ambraces her in his arms he told her that was was reckless of you what if you had died.. Christine simply smiled and said life without you or a world whwere we can't be together would be world not worth living. Now at that moment they are interrupted by voice.

"Hey what are you two doing here  the cemetary is closed I won't have you causing trouble."
It was the new grounds keeper who had replaced Daniel his name was Buzz 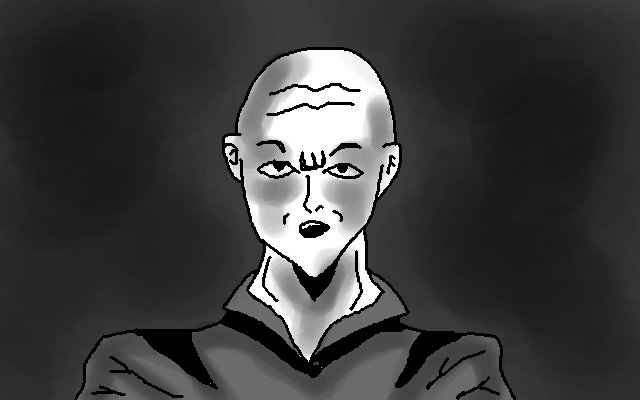 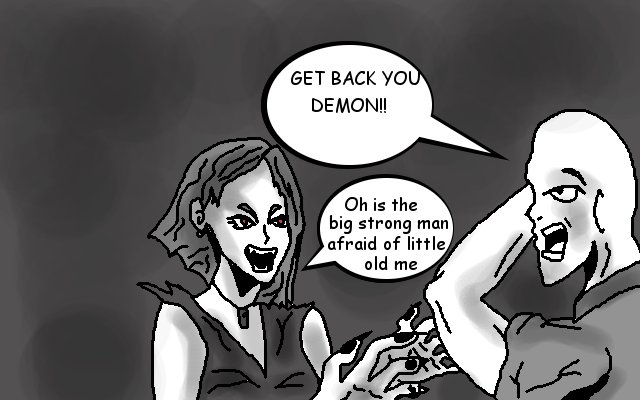 Christine instantly pounced the Grounds keeper and drained him completely and she rather enjoyed it.
About a week later Daniel and Christine had tracked down the detective and everyone else who knows abouthim and had a bit of a Putgig feast wiping them all out. Now with them out of the way they could kill  and feed with no problems.

Then came a month later 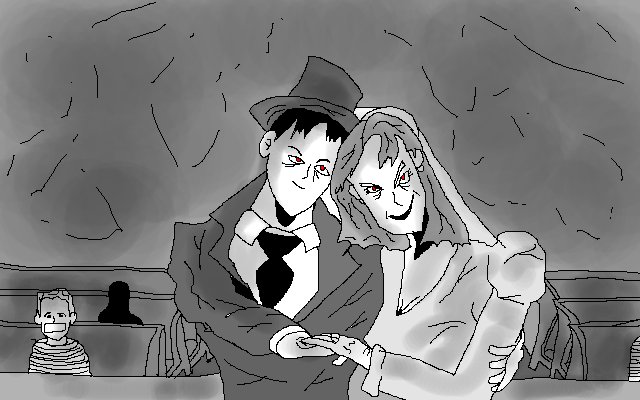 Daniel and Christine decided to get married of course since they have eaten most of their close they had to kidnap some guests for the wedding feast. Of course none of the guest realise they're the ones on the menu. Needless to say it was masacre under Gods house.
Thats where we'll leave things for now . did you enjoy this part ? would you like a Part 2? if so should Daniel and Cheistine have a kid  comment Yes or no to vote of yes should it be a boy or a girl also comment boy or girl to vote.

Alright catch ya's next time
please support me clicking on the con tent on the side bar
and by reading my horror comic
Chase Hoodlands https://tapas.io/series/Chase-Hoodlands 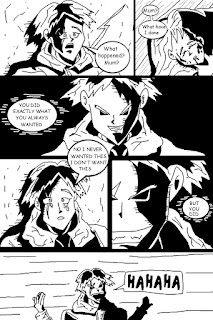 Today I am sharing one of first attempts at a manga comic Dead Girls Doll A Horror Manga.. When a young man finds a mysterious Doll at Ce... 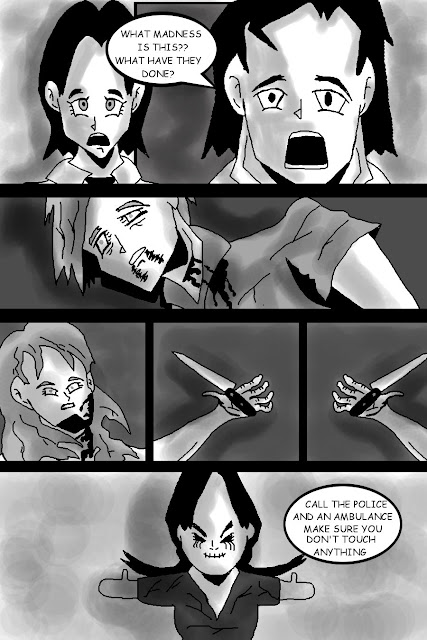 This blog is where I'll be posting reviews on webcomics I read as well as displaying some of my own content. My goal is to create a space where I can share my love for all webcomics including the ones I find that are created by other creators please help toy yourself to the free webcomic content on the side bar 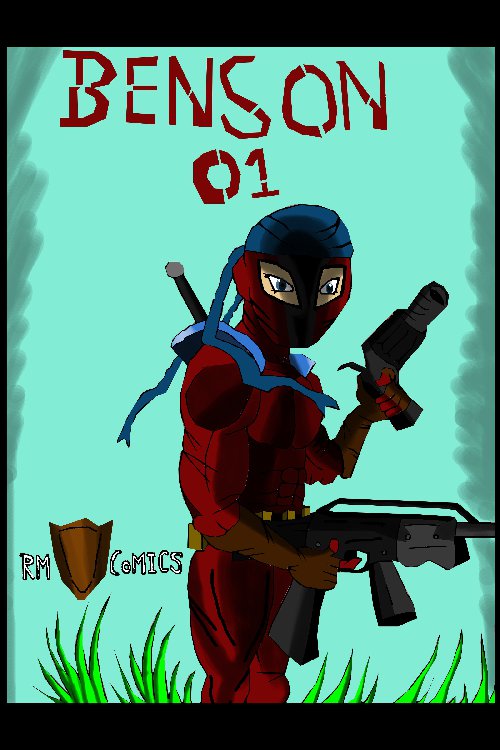 Tears In The Rain Webcomic